May 1999, Upheaval of the depths spawns intercession, Logan Sparling

It was May of 1999 that I was flying from Indianapolis to London, on my way to Sri Lanka then to stop in Wales on the way back. Before landing at Heathrow I had been praying about my trip and the ministry I had in mind to accomplish. I had just read an account of the 1904 Welsh revival and was greatly inspired.
Two weeks prior to my flight one of my intercessors shared a word with me saying the Lord was going to open my eyes to things I had never seen. She said the Lord was going to allow me to see things from his vantage point.
Near the end of my flight I was looking out the window the window and saw in the Spirit what I am sure I could not see with my physical eyes. I saw the outline of a country which I immediately recognized as Wales. At first I did not understand what I was seeing because the country seemed to be convulsing as though a mighty earthquake was shaking it. The best I can describe the sight was the countrysides were undulating, writhing almost as in great pain. I thought these were birth pangs but couldn't be positive.
After what seemed to be twenty or thirty minutes (probably more like 2 minutes) all I could see were the clouds between the plane and the ground. However, the Lord spoke that what I had seen was the warfare going on 'underground', unseen by all except those with eyes to see, but He reminded me that the Kingdom of God was going to break in again upon Wales not just with a visitation of revival, but with a spiritual transformation that would be sustained for several generations. I did identify 'pockets of activity' all over the country which I interpreted as spiritual warfare going on by individuals or small groups of people who were not connected together. Rather, it seemed to me the Lord had sovereignly raised them up to intercede. He was conducting a symphony of prayer for which no man could claim credit.
My heart was greatly encouraged. 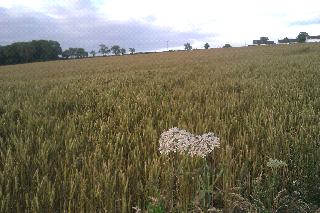 This links to a friend's collection of propheciesabout Wales and the U.K.as well as his great blog about Welsh Revival History and current happenings.